Home Blog Have You Practiced Shooting Angles with Your Hunting Crossbow? 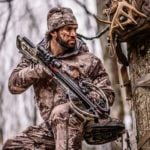 Does this routine sound familiar?  Just prior to archery season, you take your hunting crossbow out of storage and begin to prep it for use.  You take the crossbow out to your backyard or your archery club to test fire your hunting arrows with field points and broadheads to determine if the scope needs to be re-zeroed since you last used the crossbow during the previous season.  You shoot it several times from a stable rest on flat ground, and you make the necessary adjustments to be sure it will hit dead-on at the distances indicated by the multiple horizontal lines or dots in the scope.   Then, archery season starts, and you climb up into your tree stand or elevated blind and begin crossbow hunting. Do you notice anything inconsistent with how you sighted-in and practiced with your crossbow as opposed to how you will hunt with it?  Most folks use a stable rest on level ground when they are sighting in and practicing, but they do not spend much time taking shots from the same position or elevation at which they will be hunting.  But, the arrow’s point of impact should remain the same whether you are shooting on flat ground or from an elevated position, right?  Unfortunately, this is a common assumption that many crossbow hunters make, and this assumption is WRONG.

Shooting uphill, downhill, or at a downward angle from a tree stand causes the arrow’s point of impact to be HIGHER, in nearly all cases, than if you had taken the shot from the same distance on level ground.   To best prepare yourself for the many shooting scenarios that you may face during the upcoming crossbow hunting season, you should include taking practice shots that will most closely mimic the elevation or angle at which you will be shooting from your hunting set-up. First, let’s discuss why your point of impact is always higher if you shoot at an upward or downward angle as opposed to launching a crossbow arrow horizontally.  When you shoot your hunting crossbow on level ground, gravity begins to pull the arrow downward as soon as the arrow leaves the flight rail and until it hits the target.  The reason that you have multiple lines or dots in your scope is to compensate for this drop in arrow flight caused by gravity.  In this scenario, the distance that the arrow travels to the target is the same as the horizontal distance from your rest to the target itself.

But what happens when you shoot at a downward or upward angle, like out of a tree stand for instance?  When you take a shot from your stand at an animal on the ground, you are shooting at a downward angle, which means that the arrow’s flight trajectory moves both horizontally and vertically at the same time.  In other words, the crossbow arrow is traveling to the animal in a horizontal direction while it is simultaneously traveling downward in a vertical direction.  When shooting at a downward or upward angle, the distance the arrow travels will always be LONGER than the horizontal distance from your tree to the animal on the ground.  Since gravity acts upon the crossbow arrow over the shorter distance, the arrow will not drop as much as you might expect, and your point of impact will be higher than your aiming point.

How much higher your crossbow arrow will hit depends mainly on the degree of steepness of the angle at which you are shooting. In other words, the closer the animal is to you when you take the shot, the steeper the downward shooting angle is from your position up in the tree stand down to the animal.   The steeper the downward angle, the shorter the horizontal distance is that the arrow travels, and the higher your point of impact will be, up to a point.  Keep in mind, if you shoot straight down at an animal directly beneath you, your point-of-impact will no longer be high but will instead be low.   Unfortunately, there is no mathematical formula that you can use to derive exactly how high you will hit when taking angled shots or how low you will hit when shooting straight down.  The best way for you to determine the height increase for your crossbow is to practice shooting out of your tree stand at a target set up at closer distances (for steeper angles) and longer distances (for gentler angles).  You should also practice shooting your target when it is positioned directly below you to determine, in this unique scenario, how much lower your point of impact will be.  Using this approach, you can learn how much you will need to compensate your point of aim to achieve your desired point of impact with your crossbow, regardless of the animal’s distance from you.

Whether you hunt from a treestand, elevated blind, or from a blind positioned on a hill where you may shoot uphill or downhill, you will benefit from taking practice shots from a similar elevated position.  At times, knowing how much to compensate can make a lethal difference on your shot placement and whether you are ultimately able to harvest and recover the animal.