Home Blog Are the Best Crossbow Broadheads Fixed or Mechanical? 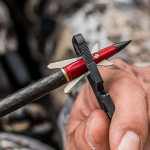 A common question that crossbow hunters ask is “Which crossbow broadheads are better to use – fixed-blade or mechanical?”  To best answer this question, we need to take a number of factors into consideration, including the differences between the shapes and how these differences affect the aerodynamics of each, the maximum arrow speed that your crossbow shoots, and the type of game that you are planning to harvest with your hunting crossbow. Fixed-blade broadheads typically have three or four blades which are part of or attached to the ferrule in a way that they never move.  In other words, the blades are fixed in place while both in flight and during wound channel creation.  Since there are no moving parts on the broadhead itself, many hunters like fixed-blade broadheads because they feel that there is less that can go wrong while the broadhead is in flight that would cause it to veer off course and miss the intended target.  But, while choosing a simpler, fixed design over a more complex, mechanical design seems to be a sound theory for achieving the best accuracy, this theory does not often hold up in practice when shooting a crossbow.

As compared to a mechanical broadhead, the blades on a fixed-blade broadhead often have a higher profile and display a greater amount of surface area over which air must travel when the arrow is in flight.  The surface area on a four-blade fixed broadhead is even greater than a three-blade because of the addition of the extra blade.  As a result of this increased surface area and, hence, a reduction in aerodynamics, fixed-blade broadheads tend to plane, or veer off-course when shot from a crossbow.  On high performance crossbows, you will see the planning worsen, as shooting at faster speeds magnifies the affect.  Your only remedy is to tune the broadhead to the arrow to achieve a higher level of accuracy.  Paper tuning a fixed-blade broadhead shot from a crossbow is not an option, since most crossbows use a flight rail from which to launch arrows.

To tune fixed-blade broadheads, some crossbow hunters will use a small rubber o-ring just above the ferrule threads that allows the broadhead to be screwed down into the insert to align the blades with the arrow’s vanes.  If you are building your own arrows, another option is to orient the insert when mounting it so that, when the broadhead is screwed into the arrow, the blades and vanes always line-up.  Performing this alignment on your crossbow hunting arrows with fixed-blade broadheads will, most times, help to improve their accuracy and precision.

If you decide that you want to shoot a fixed-blade, we recommend that you avoid broadheads with four blades and instead look for ones with just three.  We also recommend choosing fixed-blade broadheads that have a cutting diameter between 7/8” and 1 1/4”, as they tend to be more aerodynamic with the planning effect much less pronounced in blades this size.  This does, however, limit the cutting diameter of the wound channel when the broadhead passes through an animal. Front-deploying mechanical broadheads for crossbows have the advantage of offering a greater cutting diameter than fixed-blades, which means greater wound channel damage as the broadhead passes through the animal.  Most mechanical broadheads have cutting diameters that range between 1 1/8” to 1 7/8”.  They also have the advantage of being more aerodynamic with a lower blade profile, since most are designed to have the blades seated tightly against the ferrule until they are deployed.  Front-deploy broadheads for crossbows will typically fly without the planning problem associated with fixed blades – as long as the blades stay retained.  If your crossbow shoots your arrow up to 350 feet-per-second, blade retention will likely not be a problem.  However, if you are shooting a high performance crossbow that launches arrows at speeds of more than 350 feet-per-second or better, you may start to encounter some accuracy issues. Rear-deploying mechanical broadheads for crossbows also utilize a hinged-blade design, however the blades fold backward in the ferrule such that the rear portion of the blade sits closest to the front tip.  When the broadhead strikes an animal, the rear portion of the blades make contact, and this causes the blades to swing open in a dynamic, scissor-like fashion.  Because of this type of motion, most rear-deploying broadheads only have two blades.  This is an advantage over the fixed and front-deploying styles because eliminating a blade further reduces the exposed blade surface area, thereby making this type of broadhead the most aerodynamic and accurate for all hunting crossbows.  Perhaps most importantly, the design of a rear-deploying broadhead does not require springs or collars to ensure that the blades stay in place at launch and during flight.  Regardless of the speed that your crossbow shoots, especially if you are shooting a high performance crossbow, the rear-deploying, 2-blade style is your best choice. When developing our own crossbow hunting broadhead, the EVO-X CenterPunch Broadhead, we examined all three common types of crossbow broadhead designs on the market today and tested 20 of them for long-range accuracy, wound channel creation, and penetration performance.  The two-blade, rear-deploying style of the EVO-X CenterPunch Broadhead was the decisive leader in all of these categories.  Using high-speed camera footage, our engineers were able to see the arrow and broadhead in flight – just before the broadhead penetrated its target – and the blades NEVER opened prematurely, regardless of the speed and power of the crossbow that was used for testing.  Moreover, the groups shot with this broadhead at 60-yards averaged 2-inches in diameter – far tighter than any other crossbow broadheads tested.  When shot through ballistics gel to analyze cutting performance, the blades slashed a devastatingly wide wound channel, showing that the broadhead is sure to inflict maximum damage.

High performance crossbows require high-performance broadheads, and the EVO-X CenterPunch Broadhead has a 1 7/8” cutting diameter built with a rugged 7075 T6 aluminum ferrule, an ultra-strong precision machined point, and scalpel-sharp 440A stainless steel blades.  It creates massive entrance and exit wounds for large blood trails and quick recoveries and will help you to be a more successful crossbow hunter.