Reverse-draw style crossbows like the TenPoint Nitro XRT and the Wicked Ridge RDX 400 have seen a rise in popularity over the past few years.  The reverse-draw design yields certain advantages over its traditional forward draw counterpart when it comes to balance, performance, and overall quietness of the shot.  If you have never thought of shooting a reverse-draw crossbow in the past, you might want to consider these five advantages when planning your future crossbow purchase. By mounting the bow assembly to the stock backwards, in the reverse direction, the aluminum riser and limb pockets are mounted mid-way down the stock instead of at the far end of the flight rail.  This moves the center of gravity of the crossbow closer to your body and places most of the crossbow’s weight behind the fore-grip support hand.  This eliminates the “nose heavy” feel that most forward draw style crossbows have.  A reverse-draw crossbow can weigh just as much as a forward draw crossbow, however, shifting the weight closer to your body makes the crossbow “feel” lighter and makes it the easiest of all types to shoot from an off-hand position. 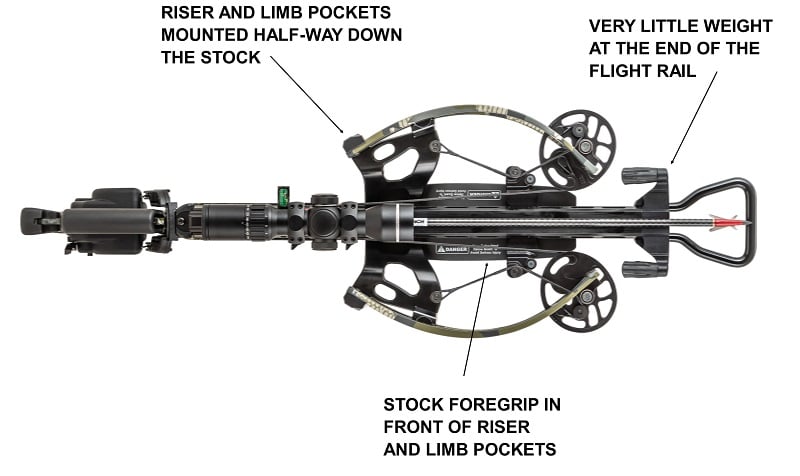 By reversing the bow assembly and changing the riser mounting position, the string’s resting position is extended a few inches farther down the flight rail.  This increases the distance that the string accelerates the crossbow arrow (also referred to as the power stroke) and results in faster arrow speed when compared to an arrow shot from a forward draw crossbow with the same rail length.   Because of the increase to the power stroke on a reverse-draw crossbow, you do not have to make the flight rail and crossbow longer to shoot higher speeds. When you shoot a front-heavy forward draw crossbow, your fore-grip hand must support the weight of the bow assembly sitting at the end of the flight rail.  This causes some shooters to “fight” the tendency of the front end of the crossbow to move constantly downward when shooting off-hand.  When your fore-grip hand does not have to fight this weight due to the difference in design of the reverse-draw crossbow, you are able to hold on your target more steadily, greatly reducing the size of the groups that you can shoot without a rest.

Reverse-draw crossbows are more “energy-efficient” than forward draw crossbows.  Since the power stroke of the reverse-draw is longer than that of a forward draw, the string and cables can be mounted at a lower draw weight but still accelerate the crossbow arrow to a higher speed than that of a forward draw crossbow with the same draw weight and overall crossbow length.  This means that, after the arrow has left the flight rail, there is less energy left over to be dissipated by the crossbow parts, meaning there is less vibration after the shot.  Less vibration means the shot will be quieter. 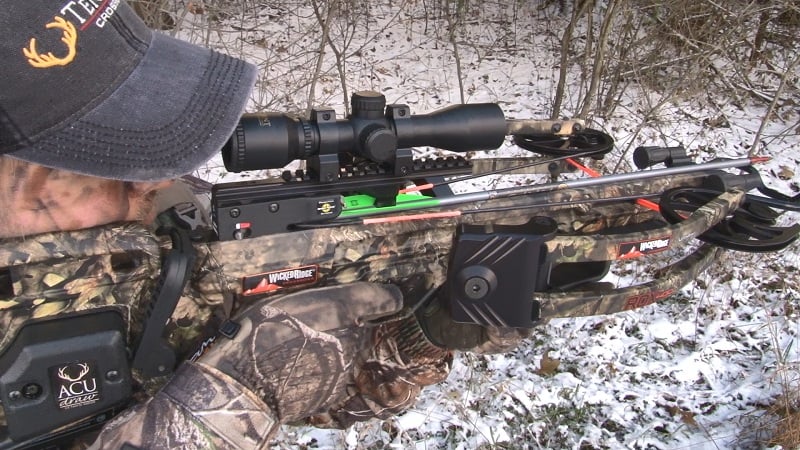 Since the string and cables on a reverse-draw crossbow are mounted at a lower draw weight, generating less vibration after the shot, the result is an extremely smooth shooting crossbow.  Less vibration means less “muzzle jump” which allows you to more easily follow through the shot by keeping the crosshair on your target after the arrow has been launched.  Additionally, less draw weight is held by the trigger mechanism while the string is cocked, which yields a lighter and crisper trigger break.   These advantages translate into a more desirable shooting experience overall.