One obvious change to hunting crossbow designs over the past 20 years is how narrow the bow assemblies have become.  When TenPoint produced its first line of crossbows in the late 1990’s, the widths of the bow assemblies were around 24-inches when cocked.   By 2013, the average width of TenPoint’s line-up was reduced to a mere 13-inches when cocked.  Today’s ultra-narrow, high performance TenPoint crossbows now average only 7-inches wide when cocked.  In the span of 20 years, bow assembly technology has evolved so much that average widths have shrunk by 17-inches!

When you change the width of the bow assembly, you also change the angle that is formed between the right and left sides of the bowstring when the crossbow is cocked.  When the bow assembly is wider, the angle is greater, and when the bow assembly is narrower, the angle is reduced.  Thus, as string angles change, the shape of the nock that works best with a specific angle must also change.  Back 20 years ago, the best nock to shoot out of a TenPoint was a flat nock.  It had many advantages over the moon and capture nock styles that were being used at the time.  In 2013, when the bow assemblies became significantly narrower, TenPoint developed the Omni-Nock to accommodate for the reduced angle.  With bow assembly widths on TenPoint’s new 2019 line-up now ranging from only 6 to 9-inches when cocked, TenPoint recognized the need for another evolutionary change in nock shape and has developed the Alpha-Nock, the most technologically advanced crossbow nock to date. 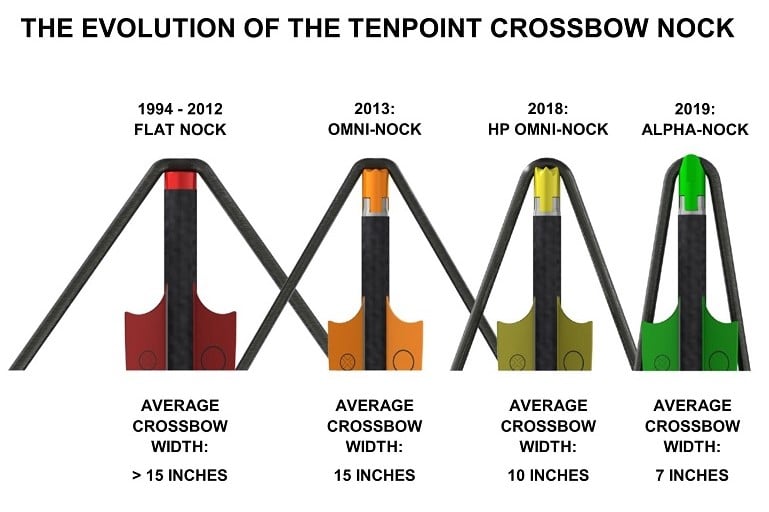 Proper string engagement of the nock is critical for consistent, accurate shooting results and for the proper long-term functioning of your crossbow.  At the time when TenPoint was requiring the use of a flat nock, the string angle on the bow assemblies was wide enough that the center serving of the string would stay in contact with the flat face of the nock as the arrow was pushed down the flight rail.  Eventually, bow assembly widths began to narrow as customers began to request more narrow crossbow options in the marketplace.  By 2013, string angles had become so narrow that TenPoint realized the bowstring would no longer stay engaged with the center of the flat nock face.  As the string angle became smaller, the string began to pinch the edge of the nock’s circumference, rather than push the nock face.

Simultaneous with bow assemblies becoming narrower, crossbows also began to shoot faster and harder.  This meant that draw weights were also increasing, which increased the amount of force that the string exerts on the nock just as the shot breaks.  TenPoint recognized that they needed a nock that also had a channel for the string to provide an upper and lower barrier to prevent the string from sliding under or over the nock during the shot.  Hence, the Omni-Nock was created.  Fast forward to today.  TenPoint’s 2019 line-up now features crossbows with cocked bow assembly widths that range from only 6 to 9-inches.  The string angles on these new crossbows are the smallest yet, and the crossbows also shoot faster and harder than any crossbows TenPoint has previously made. The Alpha-Nock is truly unique.  It features a deep bowstring channel with elongated “ears”, far deeper than the channel on the Omni-Nock or even the channel found in moon and capture nocks.  The deep channel design holds the bowstring in place during the shot which prevents the string from sliding past the nock and under or over-shooting the arrow shaft.  It also has a large, smooth radius base that improves string-to-nock engagement and allows the string to contour around the sides of the nock without pinching or causing premature wear to the string’s center serving.

The greatest advantage of the new Alpha-Nock design is that it yields straighter nock travel which translates into greater down-range accuracy.  TenPoint has determined that use of the Alpha-Nock in the new ultra-narrow crossbows leads to 28% better accuracy as compared to using the Omni-Nock. Alpha-Nocks are now required for use on all crossbows in TenPoint’s 2019 line-up, and they are included with the arrows in every TenPoint-branded bow package.