Home Blog Is a Lighter or Heavier Arrow Best for Crossbow Hunting?

With so many different arrow offerings now available on the market, how are you to choose which arrow will yield the most accurate and lethal results?  Is it best to maximize the speed of your crossbow by shooting the lightest arrow possible, or is it better to shoot a heavier arrow that carries with it a greater amount of energy?  To best answer these questions, you need to have a general understanding of how shooting different arrow weights affects the speed of your crossbow and how the speed of the arrow determines how much energy the arrow carries with it.

TenPoint offers crossbow arrows in many different weights that range from 350 to 445-grains.  By “weight”, I mean the total finished arrow weight, which includes the insert, shaft, vanes, nock, and point, and can range from lightweight (350 to 399 grains) to standard-weight (400 to 459 grains) to heavyweight (460 to 750 grains).  The muzzle speed of an arrow shot out of the same crossbow will change, depending on the weight of the arrow that you shoot.  If you shoot a lighter arrow, like the TenPoint Pro Lite, the speed will be faster than shooting a heavier one, like the EVO-X CenterPunch Premium Carbon arrow.  If you are shooting your crossbow in competition, a lightweight arrow is ideal, since accuracy is the focus of competitive shooting and not arrow penetration.

Crossbow arrows come in many different weights – but which is best for crossbow hunting?

Most advertised crossbow speeds are determined by using the lightest arrow possible, and, unless you use this arrow, the speed at muzzle will be slower than advertised.  For hunting purposes, you are better off to use arrows in the standard-weight or heavyweight ranges, which means, if you are planning to use the crossbow for hunting, you will likely not be shooting at the crossbow’s maximum speed.  Do not be too concerned about this – there are advantages to be gained by shooting a heavier arrow more slowly that outweigh the advantage of increased speed.

Crossbows transfer the energy stored in the bow assembly to the arrow through the string and accelerate the arrow down the flight rail.  The crossbow delivers the same amount of force to the arrow when it launches it each time.  A lighter arrow is easier to move from rest, so the crossbow will shoot a lighter arrow faster than it will shoot a heavier one.  But for hunting purposes, you want to shoot an arrow that has the greatest amount of penetration power, or kinetic energy, while still shooting as fast and as accurately as possible. A crossbow transfers the energy stored in the bow assembly to the arrow through the string and accelerates the arrow down the flight rail. 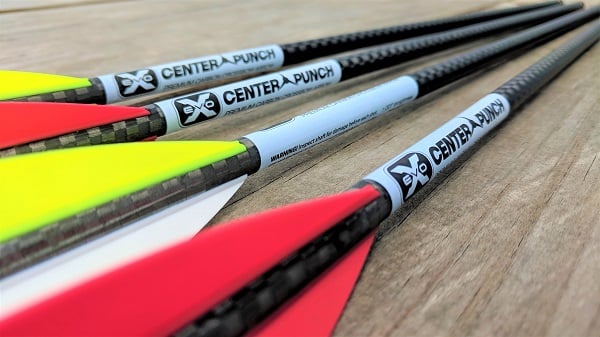 For hunting purposes, you should shoot an arrow, like the EVO-X CenterPunch Premium Carbon Crossbow Arrow, that has the greatest amount of penetration power while still maintaining lethal accuracy.

Thus, when given the choice between shooting a lighter or heavier arrow, the heavier arrow will yield the best results for crossbow hunting.  Now that you know how to choose the best hunting arrow, the only thing you have left to do is to pair it with the perfect crossbow broadhead.